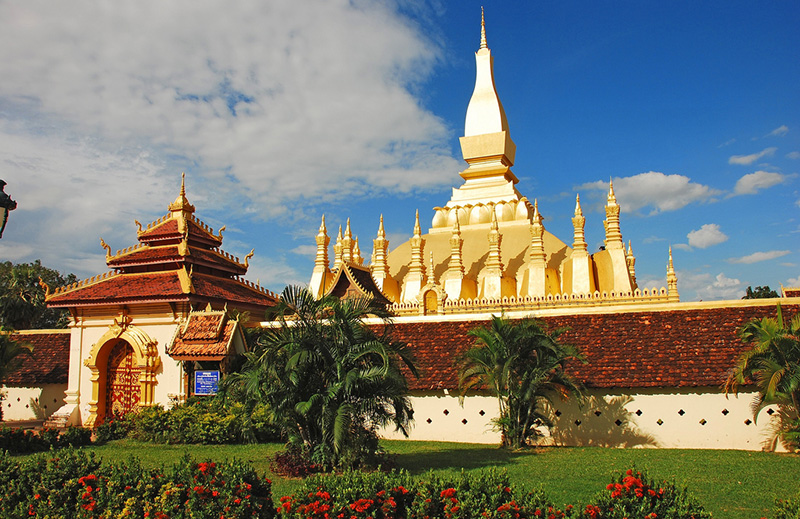 The Peoples’ Democratic Republic of Laos is located in the center of Indochina, sharing borders with China to the North 416 kilometers, Myanmar to Northwest 236 kilometers, Thailand to the West 1,835 kilometers, Cambodia to the South 492 kilometers and Vietnam to the East 1,957 kilometers.

With a total area of 236,800 square kilometers, around 70% of Laos’ terrain is mountainous, reaching a maximum elevation of 2,820 meters in Xieng Khouang Province. The landscapes of northern Laos and the regions adjacent to Vietnam, in particular, are dominated by rough mountains.

The Mekong River is the main geographical feature in the west and, in fact, forms a natural border with Thailand in some areas. The Mekong flows through nearly 1,900 kilometers of Lao territory and shapes much of the lifestyle of the people of Laos. In the South the Mekong reaches a breadth of 20 kilometers, creating an area with thousands of islands.

CLIMATE
Most of the year is hot and humid. Laos enjoys a tropical climate with two distinct seasons. The rainy season is from the beginning of May to the end of September, and the dry season is from October through April. The yearly average temperature is about 28 degrees Celsius, rising to a maximum of 38 degrees Celsius during April and May.

In Vientiane a minimum temperature of 19 degrees Celsius is to be expected during January. In mountainous areas, however, temperature drops to as low as 14-15 degrees Celsius during the winter months, and during cold nights, can easily reach the freezing point. The average precipitation is highest in Southern Laos, where the Annamite Mountains receive over 3,000 mm. annually. In Vientiane rainfall is about 1,500-2,000 mm., and in the Northern provinces only 1,000-1,500 mm.

LOCATION & TERRAIN
The Lao P.D.R. is located in the heart of the Indochina Peninsula in Southeast Asia. It lies between latitude 14 to 23 degrees North and longitude 100 to 108 degrees East. It is the only Southeast Asian country without direct access to the sea, stretching North to South 1,700 kilometers.

Laos encompasses a total of 236,800 square kilometers with the terrain characterized by three distinct regions – mountains, plateaus, and plains. The mountains and plateaus make up three-quarters of the total area.

High mountains rising to an average height of 1,500 meters dominate the Northern region. The three highest mountains in the country are all located in the Phou Ane Plateau in Xieng Khouang Province. They are Phou Bia at 2,820 meters, Phou Xao at 2,690 meters and Phou Xamxum at 2,620 meters. The Phou Luang (Annamite Range) stretches from Southeast on the Phouane Plateau down to the Cambodian border; the others are the Nakai Plateau in Khammouane Province and the Bolaven Plateau in Southern Laos, which is over 1,000 meters above sea level.

The plain region consists of large and small plain areas distributed along the Mekong River. The Vientiane Plain, the largest, is situated on the lower reaches of the Nam Ngum River. The Savannakhet Plain is situated on the lower reaches of the Sebangfai River and Sebanghieng River, while the Champasack Plain on the Mekong River stretches out to the Thai and Cambodian borders. Blessed with rich and fertile soil, these plains represent one quarter of the total area known as the granaries of the country.

The Lao PDR is criss-crossed with a myriad of rivers and streams. The largest is the Mekong River, flowing for 1,898 kilometers from the North to the South, with 919 kilometers of the river forming the major portion of the border with Thailand. It is estimated that some 60% of all the water entering the Mekong River system originates in Laos. These rivers and streams provide great potential for hydropower development with 51% of the power potential in the lower Mekong basin contained within Laos.